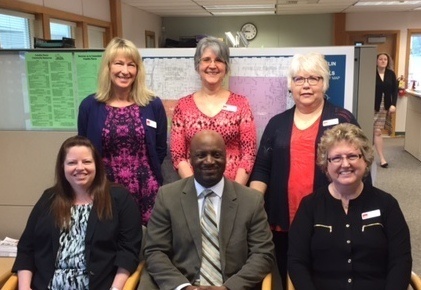 While the district has typically had strong teacher retention rates and high-levels of teacher engagement, it struggled each year with getting ahead of year-end budget planning associated with the hiring of new teachers and replacement of teachers that were leaving the district for one reason or another, especially in light of the continually decreasing teacher employment pool.

Additionally,  administrators found that the turnaround time for leave requests would sometimes take more than two weeks to complete, which made it difficult for HR to coordinate follow up activities that could be required, such as coordinating substitute teachers or providing additional family medical leave information to the employee requesting leave.

“We used to rely on an inter-office courier that went out to the sites twice a week," said Diane Hall, Certificated HR Manager at Franklin Pierce. "As a result, it would sometimes take two weeks or more for HR to receive something as simple as a leave request because of all the back and forth needed in the event that the requester did not get a signature from their principal or they left out some required information from our forms.”

Neither HR nor the person requesting the leave could track the status of their request once the forms were in transit. “We’d get phone calls constantly asking us whether or not we received the request,” added Hall. “Plus to process the requests for leave, we would need to make multiple copies and manually distribute them via the same courier back to the requestor and other departments who need this information.”

Additionally, to start its annual budgeting and hiring process, the district requires teaching staff to provide a Letter of Intent to indicate whether or not they were returning the following school year. “This would normally take us two to three months to get all the responses back, and because teachers were sending in freeform notices, we were left with little information about why they were leaving or how to contact them once they left the district, which made it more time consuming to provide follow-up materials regarding their exit, such as payroll tax information,” said Hall.

However, more troubling was the fact that that the district could not be proactive in identifying when, where and why there were personnel gaps at particular school sites.

“We started by first defining our process to make sure we had a clear understanding of where approvals were needed and where things have been delayed in the past,” said Hall.

A typical leave request at Franklin Pierce must go from the teacher to the school site principal for approval prior to making its way to the central office where the assistant superintendent gives final authorization. Once that occurs, copies of the leave request must make their way to the substitute coordinator, the payroll department and finally back to the office manager at the originating school site.

“One of the advantages of working with Informed K12 is that we were able to visualize that process and see how things need to be routed,” added Hall. “And, since we’re now able to see where forms are in the process, it’s much easier for HR to provide a status to employees when they ask, and for us to send out reminders to approvers.”

“Within a couple of weeks, we had received close to 95% of our letters of intent, and the 5% we did not receive were from employees who we already knew were leaving the district for one reason or another,” said Hall. “Normally, that is a process that takes two to three months to complete.”

Armed with data from Informed K12, Franklin Pierce was able to identify which staff members were returning, which ones were uncertain and which ones were leaving the district.  From a resource planning perspective, they were able to identify quickly which schools needed to backfill the most positions, and where specialist roles were needed based on non-returns. They also were able to digitize their exit interview process so they could identify any areas for improvement.

In addition to faster completion rates for their letters of intent, Franklin Pierce now has more data to support their budgeting and planning process, including details on why teachers are leaving, where they’re going, and which sites will need new hires as a result. “Plus it makes our jobs a lot easier to make it a smooth transition for teachers by making sure we can provide them with all of the information they need, such as payroll, benefits and tax information,” said Hall.

According to Hall, the feedback from staff on both the letter of intent and leave of absence forms has been overwhelmingly positive. Many staff members have written comments about how much they enjoy the new digital process. “The common theme we hear is just how much time it saves,” said Hall.